Introduction: Age determination is essential for human being, because of its social, legal, and judicial involvement. The tooth represents an excellent medicolegal tool for age assessment through its growth, biological behavior, and aging. The aim of this study was to find a correlation between pulp volume dimension and chronological age (AC) using the Drusini’s method.

Materials and methods: A total of 150 panoramic radiographs of Senegalese people aged 10–44 years were included in this study. Drusini’s method was used to estimate age. The collected data were analyzed with R software version 3.6.1. Student’s t-test was used for mean comparisons with a significance threshold of 0.01.

Conclusion: Drusini et al.’s method could be a useful tool for age determination in a Senegalese population.

Conflict of interest: None

The discovery of a nonidentified body raises questions to be answered by the coroner, among them, the age of the dead body. Research is then undertaken to determine the profile (ethnicity, sex, and age) of the victim. In age assessment, bone and dental methods are most widely used. The role of the dental organ in this estimation process is often decisive. Because of its biological behavior and morphological features, the tooth represents a medicolegal tool of extreme importance in the assessment of age.1 This last one is based on the study of the root transparency, the racemization of the amino acids, the radiological and genetic methods. The study of pulp aging as an indicator of age is based on knowledge of the repairing potential of the pulp, whose production of physiological secondary restorative dentin continues in adult teeth.

In 1925, Bodecker showed that AC was correlated with the affixing of secondary dentin.2 Ikeda et al., in 1985, developed the coronal pulp index (TCI) for age estimation by taking X-rays of extracted teeth.3

Later, Drusini, in 1993, applied the calculation of TCI on radiographs of living people.4 According to Drusini et al., this affixing of secondary dentin remains a morphological indicator and a significant biomarker of dental age, as it is not an alteration caused by dental erosion.5

The correlation between pulp reduction and dental age has been the subject of many investigations among Caucasian,6 Indian,7 and Arab populations.8

To date, no studies have tested its applicability in West African melanoderm subjects. This study was aimed to test the validity of the coronal pulp index on a sample of Senegalese melanoderm people.

This descriptive study was carried out within the Department of Odontology of the Faculty of Medicine, Pharmacy, and Odontology of Dakar (Senegal).

In the present study, teeth with restorations, caries, pathologies (including periapical lesions), and severe attrition were excluded. Furthermore, endodontically treated teeth, or teeth with orthodontic appliances that resulted in inadequate visualization and inability to acquire measurements, were not included in the study. Poor quality Orthopantomograms (OPGs) with inadequate exposure, incorrect patient positioning, and unsharp images were omitted. Thus, the number of teeth analyzed in each OPG varied based on the clinical and radiological characteristics.

The sample size was determined from the results obtained by Ngom et al.9

The statistical formula below was used to estimate the study population (95% confidence level and 0.06 degree of accuracy).

The parameters height of the crown (CH) and CPCH were studied. Then TCI for each tooth was calculated as follows:

CH: is the maximum perpendicular distance from the cervical line to the tip of the highest cusp of tooth.

CPCH: is the distance from cervical line to the coronal tip of the pulp chamber.

All JPEG panoramic radiographs have been converted to DICOM and processed with the Radiant 3D software (Fig. 2). The measurements made for the CH and CPCH distances were recorded in millimeters (mm).

Secondly, the Spearson’s test was used to determine the correlation between chronological and TCI (molar and premolar) was obtained by linear regression analysis. In all tests, p < 0.05 was considered statistically significant. Finally, different regression models were explored in the calculations of dental age (taken as dependent variable) as a function of the TCI score.

A total of 150 panoramic radiographs were analyzed. The average AC was 18.0 ± 7.04 years for women and 17.1 ± 5.84 years for men. Table 1 shows the averages of the CH and CPCH measurements at the level of the first premolar and first mandibular molar. The premolar CH was slightly higher in men 6.85 ± 0.85 mm than in women 5.60 ± 0.92 mm. No statistically significant differences by sex were noted. 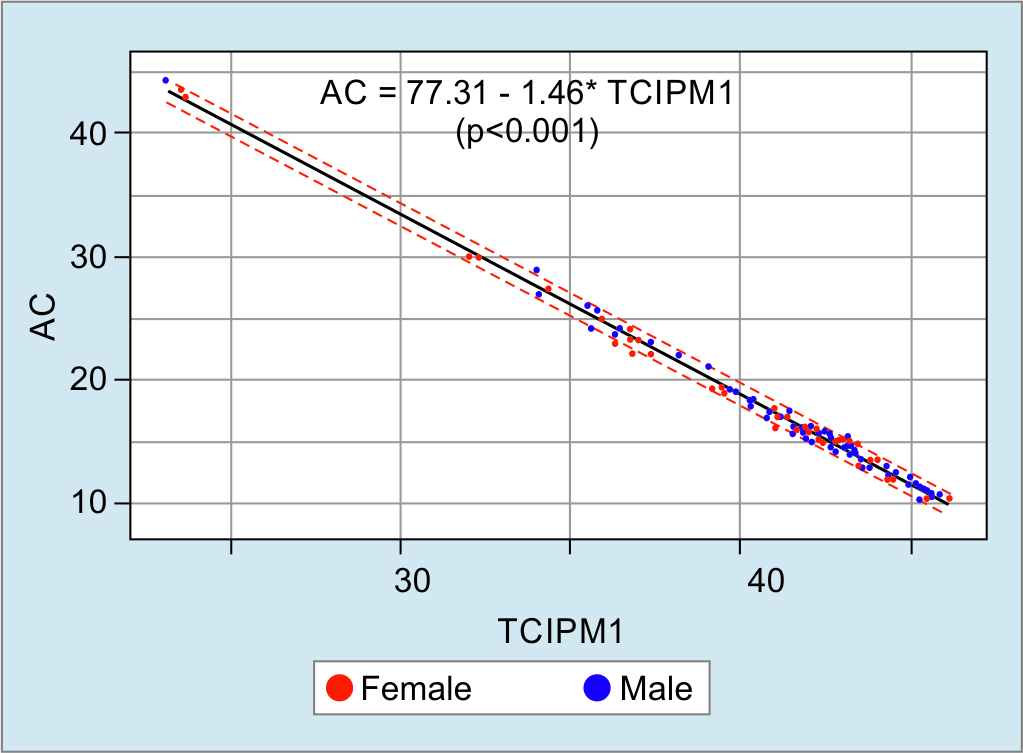 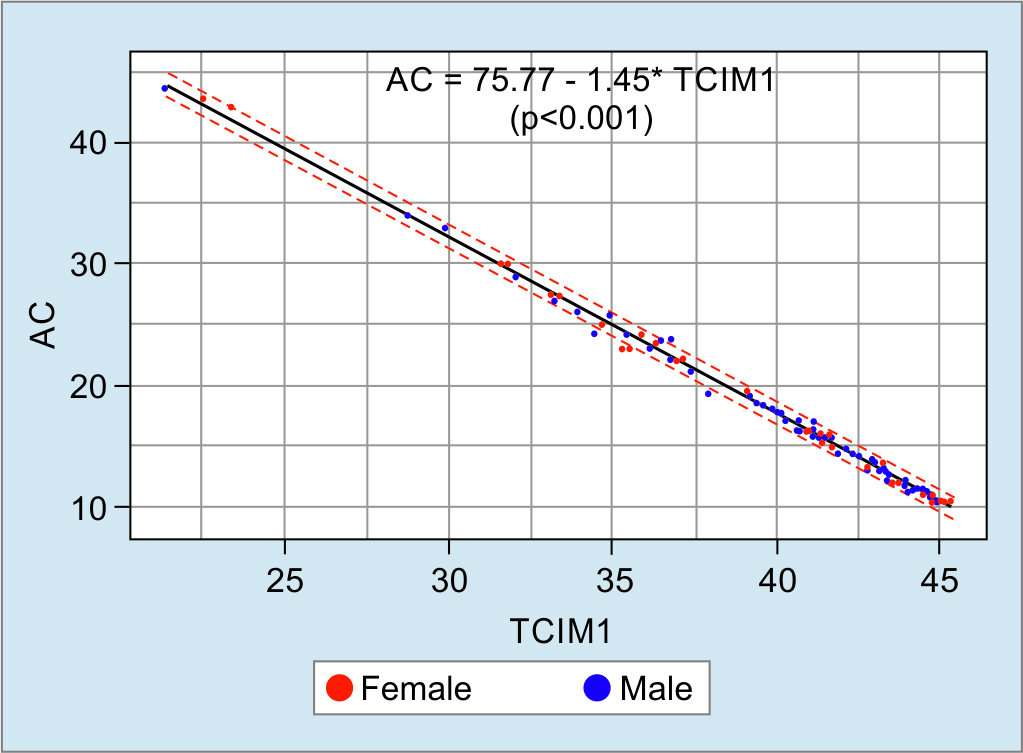 Reduction in pulp cavity volume due to secondary dentin deposition could be used as an indicator of age.10 This morphological change can be observed and analyzed by three-dimensional and two-dimensional panoramic radiological techniques.

The method consisted of evaluating the dimensions of the pulp chamber (CPCH) and the crown (CH) using the Radiant 3D software.

The result of the Pearson’s correlation test shows a strongly significant negative correlation between molar TCI and AC p < 0.001.

The results of this study are similar to those of the Koranne et al.11 study in Indian subjects aged 20–60 years.

The authors concluded that the Drusini’s method is simple, noninvasive, inexpensive, and of good applicability.11

Similarly, Igbigbi and Nyirenda12 in their study of the estimated age of 134 adults, including 77 men and 57 women aged 20–80 years, concluded that the Drusini’s method was valid. The results of their study show a strong correlation in both men (r = –0.650) and women (–0.799) between AC and molar and premolar TCI.12

In Australia, Karkhanis et al. in a large sample, 220 women and 230 men indicated that the method may be applicable for forensic purposes.13 Results of Talabani et al.14 from 96 participants corroborated the results of this study and those of Karkhanis et al.13 and Koranne et al.11

The study by Havale et al.15 with 100 children aged 5–10 years, confirms the results of this study. With a correlation coefficient r = –0.59, found between AC and TCI, the authors had concluded that the Drusini’s method is well applicable.16 Drusini, out of a sample of 433 participants, had a strong correlation of –0.92 AC and TCI.16 With an error of ±5 years in 81.4% of cases at the level of molar TCI in men, Drusini16 has estimated that this method, based on pulp aging, can be easily applied in the determination of the age of living and deceased individuals.

The congruence of the Drusini’s method is also highlighted by Gotmare et al.’s17 study of 88 people (54 men and 34 women). The results concluded that TCI is a reliable, accurate, noninvasive, and easy-to-use biomarker for age estimation and may be applicable to living and deceased individuals.17,18 The results of this study are different from those of Jain et al.18 involving 180 subjects of Chhattisgarh aged 15–70 years. Jain et al.18 found a weak correlation with TCI-M1 r = –0.178 and TCI-PM1 r = –0.187. The authors concluded that the method was not valid.18

Gok et al.19 also concluded that the Drusini’s method was not applicable in a sample of 9,059 Turkish people aged 15–40 years. Another Pakistani study by Badar et al., on 80 participants concluded that TCI could not be used for age estimation.20

In short, the method used in this study is simple and inexpensive. The results obtained have showed good congruence and applicability. However, further studies with a larger sample are needed.

The Drusini’s method used in this study is simple and noninvasive. The results obtained show a highly acceptable congruence for estimating age. Therefore, it can be recommended in forensic medicine for age estimation especially in a Senegalese context marked by the problem of “ghost pupils”.