Furcation Involvement Classifications: A Critical Appraisal and Proposal for a New System

Review results: Different classifications have been proposed over different eras, the classification given by Glickman being the most common one. The proposed system is based on the site-specific clinical presentation of the furcation defects and takes into consideration the horizontal and vertical components of furcation as well as its exposure.

Conclusion: The present classification has been underscored which is entirely clinical in nature, avoiding the need for anaesthesia, radiographs and open surgeries. This simple and convenient system will assist the clinical practitioners to record the furcation invasion and aid to visualize the clinical picture of the involved tooth.

Clinical significance: This simple and convenient system will assist the clinical practitioners to record the furcation invasion and aid to visualize the clinical picture of the involved tooth.

How to cite this article: Shrestha R, Bhochhibhoya A. Furcation Involvement Classifications: A Critical Appraisal and Proposal for a New System. CODS J Dent 2021;13(1):11–17.

Conflict of interest: None

“Periodontitis is a chronic multifactorial inflammatory disease associated with dysbiotic plaque biofilms and characterized by progressive destruction of the tooth-supporting apparatus.”1 Treatment of periodontitis comprises a wide array of nonsurgical and surgical therapies. Regardless of the contemporary treatment options, therapy becomes additionally complex when the multirooted tooth is affected resulting in furcation exposure.2

A furcation invasion is defined as the extension of periodontitis or pulpitis into a trifurcation area.3 The pathogenesis of furcation invasion commences with the widening of the periodontal space and inflammatory exudation, eventually leading to the epithelial proliferation into the furcation area from the adjacent periodontal pockets.4 Furcation creates a potential niche for bacterial plaque, toxins and calculus accumulation. The anatomy and morphology of the furcation coupled with limited accessibility for instrumentation further increases the possibility of periodontitis. The complexity is heightened by the severe attachment loss resulting in a poor crown-to-root ratio and/or increased tooth mobility.5 In cases of furcation involved tooth, the risk of tooth loss is increased by 2.21–2.54 times in the maintenance phase than in teeth without furcation involvement.6,7

Furcation involvement is a local factor that influences the prognosis of the associated tooth. It is rendered to be of utmost importance to determine the prognosis of the tooth and for the selection of the therapy.16 This, in turn, aids to claim insurance, to depict time and money invested in the tooth and to play a decisive role for the retention of the concerned tooth in cases of complete rehabilitation.17,19 The diagnosis of furcation invasion is made by clinical assessment, probing, transgingival probing, radiographic assessment and open flap procedure. Generally, Glickman’s Class I furcation lesions may be simply treated by scaling and root planing20 or furcationplasty, Class II by regenerative therapy,21,23 Class III and IV by extraction or resective therapy such as hemisection, root resection or tunnel preparation.20,24,26

The classifications proposed previously have added insight to the knowledge of furcation, but are not complete in itself. The classifications given by Glickman,27 Goldman,28 Staffileno,29 Easley and Drennan,30 Goldman and Cohen,31 Basaraba,32 Grant et al. 33 Svardstrom and Wennstrom,8 Nevins and Cappetta,34 GPT3 are narrative in nature. Ramfjord and Ash,35 Hamp et al.,16 Rateitschack,36 Carnevale,37 and Walter et al.38 have considered only the horizontal involvement whereas Eskow and Kapin,39 Tarnow,40 Tal and Lemmer15 and Tonetti et al.41 have considered only the vertical involvement. Both horizontal and vertical components have been included in the classifications given by Fedi,42 Richhetti,43 Hou et al.,44 Fugazzotto45 and Rosenburg.46 Considerations of tooth diameter,39,40 the height of the root trunk,44 the number of remaining bony walls,47 the exposure of the furcation48 have been advocated.

Some of the classifications do not clearly state the categorization of the furcations. They have classified furcation invasion as less than a certain figure, for example, less than two-third or more than two-third, but do not make an attempt to classify the furcation which is equal to two-third.16,35,37,39,46 Classifications have also been done on the basis of radiographic images.38,41 In such cases overlapping of the structures in the maxillary molars creates difficulty in the diagnosis.

This system advocates clinical assessment and classification of furcation defects without the need of anaesthesia, radiographs and surgery. Clinical probing provides fairly accurate dimensions of the furcation involvement and has the advantages of being simple, practical and least expensive among all methods.19

Although open flap surgeries provide the best picture of the furcation, they are not justified for the measurement of furcation depth. Open flap surgeries cause unnecessary discomfort owing to the reentry surgery, which also has possible traumatic effects.49 Vertical and horizontal components have been found to be 0.9–1.1 mm deeper during open flap measurements and probing bone levels.49 This may be due to inter-operator variability during measurement or a more ambitious curettage with unintentional removal of bone effects.49

The proposed furcation index is greatly influenced by the Smith’s index of recession.50 This index tries to overcome limitations of previous classification systems and gives a clear picture of the furcation involvement and ensures that important factors such as the site involved, the horizontal component, the vertical component and the furcation exposure, have been taken into consideration.

Similar to the recession index, the proposed index consists of a letter, followed by two digits separated by a dash and ended with an asterisk, when indicated. The first letter of the proposed classification denotes the site of the furcation involvement. This makes examining of the furcation from all possible sides obligatory. Most classifications do not include this element, which fails to give the complete picture of the clinical presentation. The letters used are M for mesial, B for buccal, D for distal, L for lingual. This specifies the particular site of the furcation involvement and the letters can be easily used for any tooth, including premolars, maxillary molars with two roots or mandibular molars with three roots. 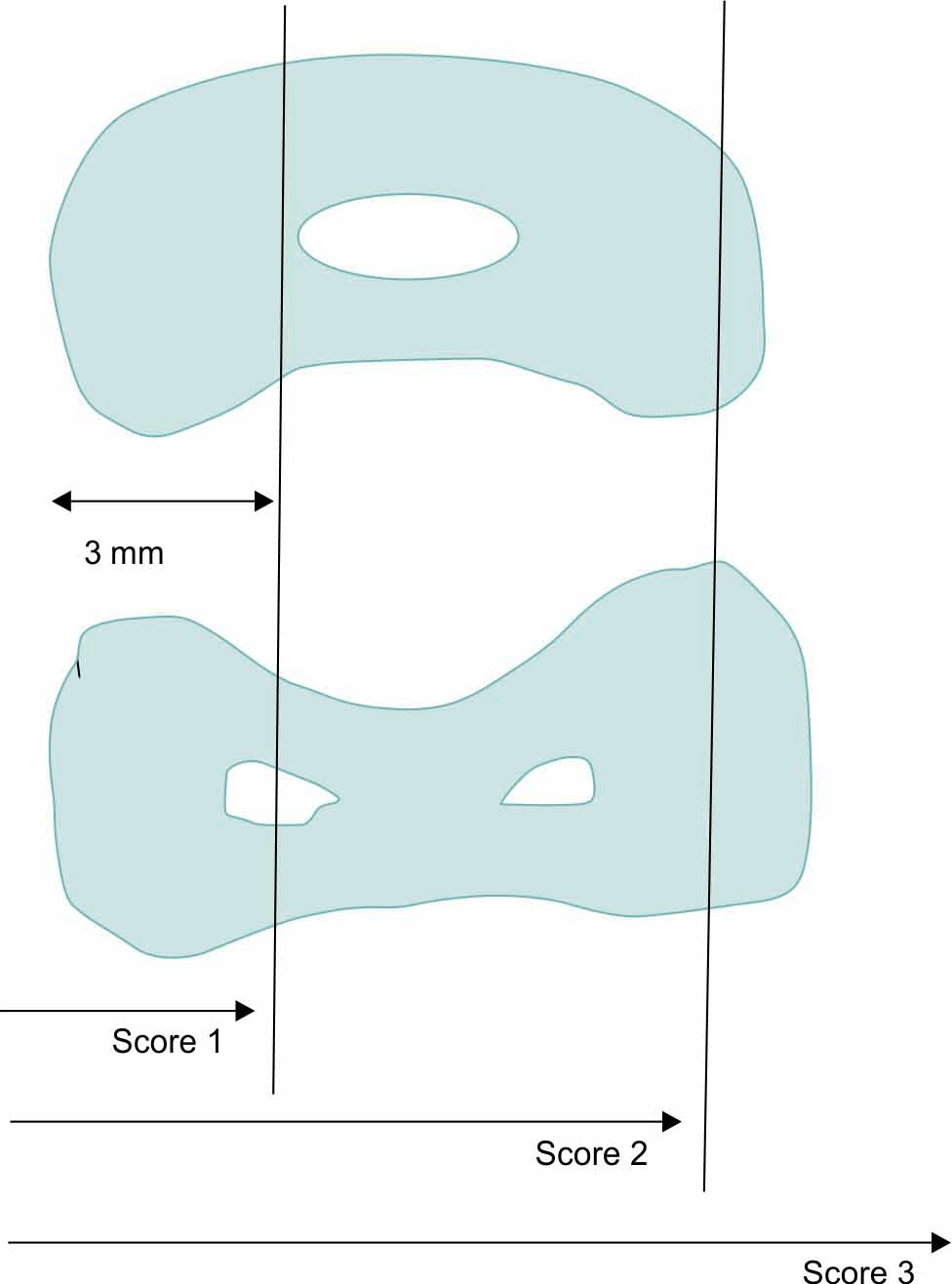 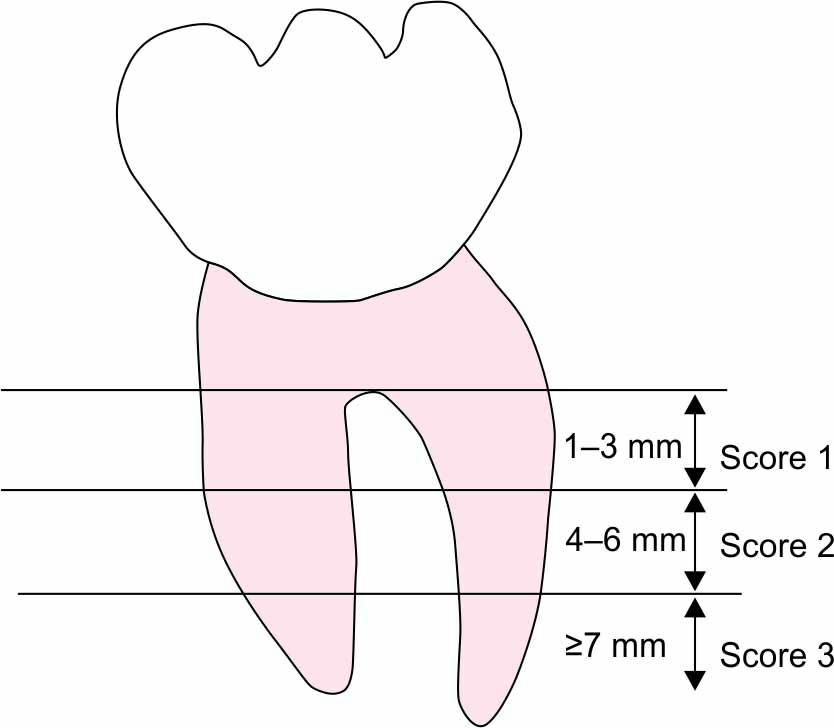 The measurements are made according to the procedure defined by Mealey,17 with some modifications. For the horizontal component, a calibrated Naber’s probe with 3 mm marking is inserted into the periodontal pocket along the root surface to locate the initial fluting of the furcation and the distance between the CEJ and furcation fluting is measured (a). It is then inserted and curved till obstruction is felt (b). The horizontal component of the furcation is recorded to the nearest millimeter as the difference between a and b. It is then classified according to the criteria as mentioned in Table 2.

For the vertical component, a straight probe with 1 mm marking is inserted into the periodontal pocket along the root surface to locate the initial fluting of the furcation and the distance between the CEJ and furcation fluting is measured (a). The probe is inserted apically until resistance is felt and the distance from CEJ to the vertical depth is noted (c). The vertical component of the furcation is recorded to the nearest millimeter as the difference between a and c. It is then classified according to the criteria mentioned in Table 3.

The vertical component of the index is followed by an asterisk, which denotes the presence of exposure of the furcation area. In case of non-exposure, the asterisk is omitted. As explained by Tarnow and Fletcher, the consideration of the vertical component is essential as the prognosis of the tooth will definitely be different although being equally probeable in a horizontal plane.40 It aids in the determination of the choice of treatment of root separation, resection, regeneration or extraction.41

There is a lack of universal acceptance of single classification system for furcation involvement due to certain limitations and drawbacks. So, there is the need for a new approach to address the lacuna in the present classification systems. The proposed system is based on the site-specific clinical presentation of the furcation defects and takes into consideration the horizontal and vertical components of furcation as well as its exposure. This simple and convenient system will assist the clinical practitioners to record the furcation invasion and aid to visualize the clinical picture of the involved tooth.

It is a site-specific index that would provide qualitative and quantitative information about the furcation and is more objective in its choice of clinical criteria and methodology. Criteria are clear, easy, quickly learned, and is reproducible. It is simple enough to be practicable under a wide variety of field conditions and can be adopted for epidemiological studies. The data offers a rapid appreciation of furcation involvement and understanding of prognosis of the tooth and its treatment needs.

But the above treatment options should be modified by the involvement of the vertical component of the furcation.

For Score 1: If the vertical component is deep, regeneration should be considered even if there is less horizontal involvement.

For Score 3: Extraction should only be chosen in case of greater vertical involvement of the furcation.

The acknowledgment of the furcation exposure will help to predict the treatment outcome. It has been inferred that scaling and root planing would be more effective in case of clinically visible furcation.48

Overestimation and underestimation are highly probable. Inter and intra-examiner differences exist in measurements of furcation dimensions. The accuracy of probing varies according to the operator’s technique, accessibility to furcation and the ability of the patient to open the mouth.4 Accessibility is hindered by broad contact areas and the presence of neighboring teeth in proximal furcation.

The horizontal readings are subjected to inaccuracy due to geometry when using a curved probe. A change in horizontal depth of 1 mm at tip is smaller than at 1 mm at the edge of the stent.49 But, the use of Naber’s probe is still recommended because a curved probe facilitates access to furcation area, which is influenced by the position of the gingival margin relative to root trunk length, sloping of fornix aperture, and shape of the roof of furcation dome.49

The index does not address factors which are directly involved in furcation involvement such as root concavities, bifurcation ridges, and cervico-enamel projections. Narrow entrances restrict the passage of the probe, which might lead to recording errors. The reference point, the initial fluting of the furcation, may show inaccurate measurement. Other sources of error include interference from calculus, presence of an overhanging restoration or crown contours.51

Different classification systems have evolved in periodontology for furcation invasion. Continuous refinement of these systems with supplementary input provides a broader insight to the practitioner and consequently aids in diagnosis, treatment, prognosis and recording of the disease under consideration. The present classification is the result of an attempt to enhance communication about the detailed information of the furcation invasion to the practitioner. It is easy to use, simple, convenient, and serves as a practical tool both for clinical and research purposes.

The proposed system is based on the site-specific clinical presentation of the furcation defects and takes into consideration the horizontal and vertical components of furcation as well as its exposure.